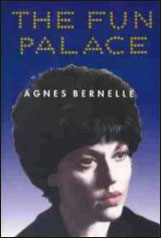 The planned sequel was never completed.

“an entertaining and sometimes moving account of her transition from life as the Catholic convert daughter of a Protestant mother and a Jewish father in pre-war Berlin” - www.emigrant.ie

“a tumultuous, semi-linear tale of a woman who … manages to rise above it all, and become one of the divas of modern cabaret” - www.blather.net 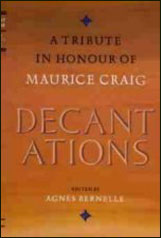 Decantations: A Tribute in Honour of Maurice Craig

After moving to Dublin, she met the architectural historian and writer, Maurice Craig, who she spent the rest of her life with in a happy home in the Sandymount area of Dublin.

The Rabbi of Bacharach

“The Rabbi of Bacharach,” is a historical novel by the German poet Heinrich Heine about Jewish life in a 15th-century town. When Agnes’ father, Rudolf Bernauer, gave the book to Carl Meinhard, his friend and business partner, it was a fine gift, bound in soft yellow leather and containing signed etchings by the artist Max Liebermann.

The next year, Mr. Meinhard gave it back with an emerald set in the cover. A tradition had begun. Each year on their birthdays, the men would exchange the book, always adding another gem. Then a silver plaque was added, inscribing the date of each exchange and declaring that whichever man survived, the other would be the ultimate owner.

When the Nazis came to power both men their possessions behind. The book somehow it found its way to New York, where Ms. Bernelle learned of its existence. She came to see it on her next trip to New York, in the late 60s/early 70s.

“I felt quite weak in the knees, I had to sit down and ask for a glass of water.”

But synagogue officials were reluctant to part with the book, and Ms. Bernelle despaired of ever recovering it. During another trip to New York in 1996, she decided to try again, telling her story and offering to buy it. The synagogue’s board then reviewed the death certificates of both men and Ms. Bernelle’s birth certificate and voted to give her the book.

Agnes Bernelle told the full story in the Jewish Quarterly.
The text here is sourced from: War & Remembrance by Douglas Martin, published in The New York Times.